They are uncommon, because they can not live in highly altered forest monocultures. They require sufficiently humid forests with enough leaf litter, logs and fallen wood. There should be enough prey such as earthworms and snails. Humid habitat is necessary, because they have no shell large enough to protect them against droughts. My Daudebardia rufa comes from Moravia, the Czech Republic.

The right side view looks like this. The large muscular body has some tubercles. There is visible a pneumostome (breathing pore) bellow the shell. The body length of this specimen is 17 mm. 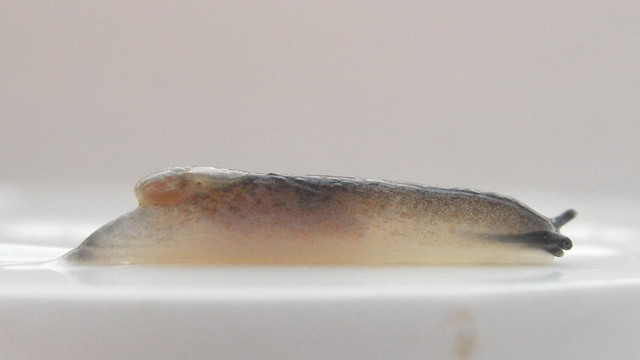 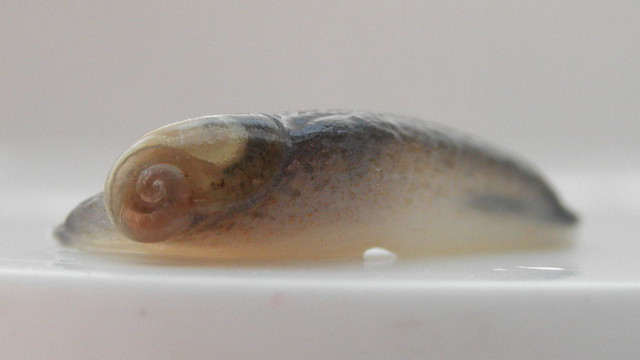 Oxychilus glaber is a species of a herbivorous and carnivorous land snail in the family Oxychilidae. Its distribution is South European and Central European. It live in woods. Its umbilicus is narrow and its spire is high in comparison with other Oxychilus species. 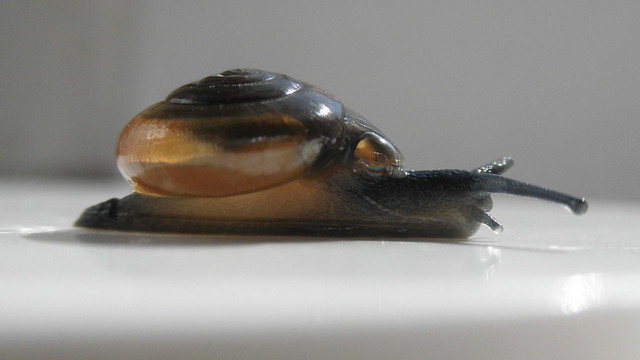 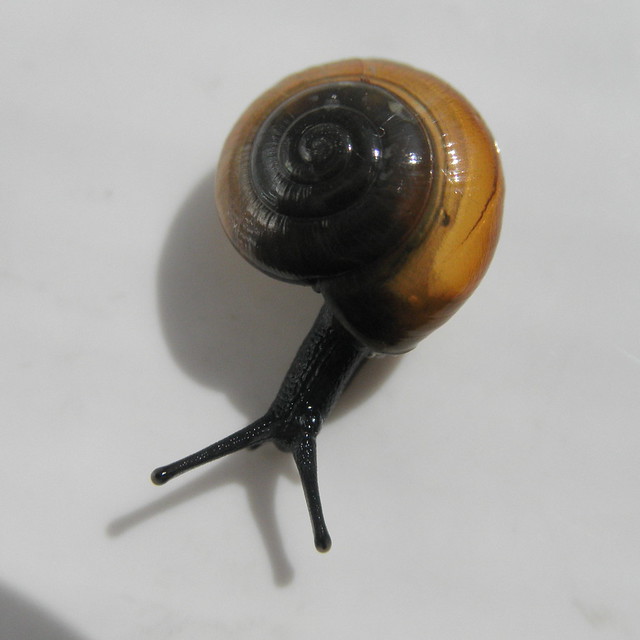 Aegopinella nitidula is a land snail living in wet habitats. This specimen is from northern Bohemia. The proper determination requires dissection but another malacologist determined it in situ based on its appearance and detailed knowledge of local malacofauna. There are usually only informations about its shell and about its reproductive system available in books. Its shell is red-brown in color. The only information about a live snail is usually like this: The color of the body is dark.

So enjoy the photo of this snail:

According to tables in Falkner et al. (2001) feeding habits are like this: It prefer dead plants. It is sometimes carnivorous/saprophagous. It rarely eat also living algae and fungi.

Your infomations about feeding habits of Aegopinella nitidula are welcomed.

Finally I have taken some photos of Oxychilus draparnaudi feeding on Trochulus hispidus after two months and half of keeping it.

I have taken the first photo on 15 October 10:34 AM and it stopped feeding on 10:52 AM. Although it is referred as a nocturnal animal, I was glad to see it feeding on daylight. It was sunny day, so taking photos was not difficult.

The first photo shows the foot, because it was feeding on the transparent lid of the terrarium. The predator was holding the whole of its prey when it was upside down.

Then I have removed the lid and rotated the lid to take these photos:

First photos immeditelly after the feeding:

Usually after the feeding process are shells empty and clean. I have probably distrubed its feeding process, because it seems that it have eaten the body of the first 3/4 of the first whorl only. The same shell of Trochulus hispidus still contain some material inside:

continuously updated spreadsheet with data what Oxychilus draparnaudi have eaten.

Perpolita hammonis is a small land snail. It is also known as Nesovitrea hammonis. It lives in Palearctic. It is quite common species, that lives in forests as well as in open habitats. Although it belongs to Oxychilidae, it can be easily identified, because it has regular radial ribs on the shell that are clearly visible under any magnifying glass.

It prefer from moist to wet humidity, so I keep them rather in wet environment.

I wanted to see how the predaceous snail Oxychilus draparnaudi hunts and eats its prey. It is called to be typical predaceous species. But after 10 days of keeping it at home I have not seen it hunting yet.

5th August – added 3 Trochulus hispidus. They have cucumber as a food source. Even when the predator was at least one day without the food and its prey has been crawling on the predator’s body, it has not been hunting them during the day.

7th August – found Trochulus hispidus (shell width 5.5 mm) eaten at 9:01 and I have taken the photo of Oxychilus above the empty shell.
–  added 6 Trochulus hispidus
– added 2 adult Laciniaria plicata. I have no idea if it will be able to eat them.

Results:
All my controls when I have found empty shells, were during the day, but the Oxychilus draparnaudi is nocturnal. Some controls were at night.
It have eaten 5 snails during 10 days.
I found no damage on shells of the eaten Trochulus and shells were completely clean inside (but with water).

Any hints how to see it hunting?