This is a cluster of eggs of a tropical land snail Macrochlamys amboinensis: 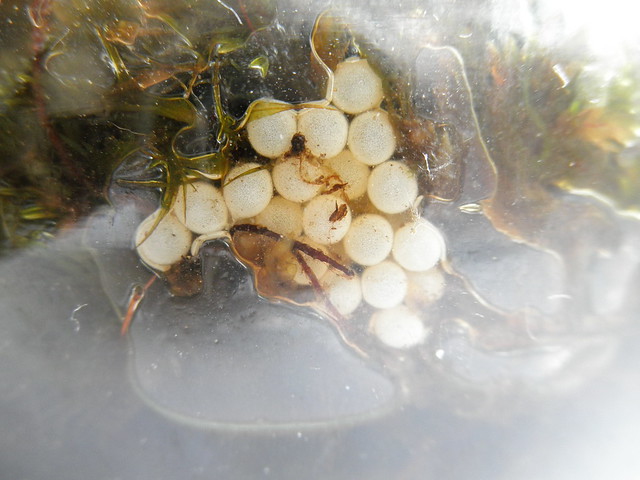 Cluster of eggs of Macrochlamys amboinensis with a ruler: 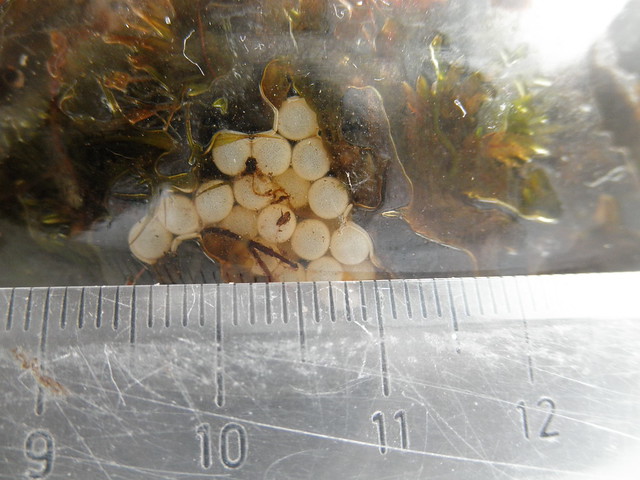 This land gastropod is Parmarion martensi. It belongs to family Ariophantidae. Some gastropods from this family has a reduced shell. The shell can be so small in some Ariophantidae species, that they can not retract into it. Such gastropods are called semi-slugs.

I thank my friend Doubravka Požárová, the botanist from Charles University in Prague, who kindly provided the following photos to readers of this blog:

Photos were taken in the surrounding of Lempuyang Temple (Pura Lempuyang Luhur) in the eastern Bali, Indonesia in 2014. It was crawling on the road. I identified the species according to photos only.

Parmarion martensi can reach body length up to 45 mm. It has caudal horn on its tail, but it is not clearly visible on this photo. This species is very variable in color.

Parmarion martensi is native to Southeast Asia. Unfortunately it is able to spread by human activies. It has established in Fiji, Samoa and Hawaii. It was also recorded in the USA. It can be a pest on agricultural crops, but not serious one. Moreover it can transfer nematode Angiostrongylus cantonensis, that can cause human disease. Therefore it is an important species and for example it is quarantine species in the USA.

Macrochlamys amboinensis (von Martens, 1864) is a land snail from the family Ariophantidae. Its synonym is Tanychlamys amboinensis. This south-eastern Asian family has – among other ones – two interesting features: extended mantle called mantle collar and caudal horn on the tail.

This species was described by German malacologist and zoologist Eduard von Martens under the name Hyalina amboinensis in 1864. The type locality is “Mollukische Inseln der Amboinagruppe: Buru, Amboina und Banda-Nera”. The specific name amboinensis refer to the Ambon Island in Indonesia. It has been also spelled Amboyna, Amboina, and Amboine.

Von Martens did not depicted this new species in 1864, but he did it three years later, in 1867. Drawing of a shell of Macrochlamys amboinensis by von Martens (1867):

American malacologist George Wahington Tryon classified this species as Zonites (Hyalinia) amboinensis within the family Zonitidae in 1886. The family Ariophantidae was established two years later, in 1888. Drawing of a shell of Macrochlamys amboinensis by G. W. Tryon (1886):

Dutch malacologist Woutera Sophie Suzanna van Benthem Jutting reported this species from the West Java. She firstly thought, that this species belong to the family Zonitidae and later she classified it as Tanychlamys amboinensis within family Helicarionidae in 1952. She reported only specimen in shell width of 12-13 mm. As of shell features and radula depiction I would recommend van Benthem Jutting’s description.

For distinguishing from other species this can help a bit: The last whorl is well-rounded. Apex of Macrochlamys amboinensis is rounded in comparison with other similar species in the genus.

Its distribution include Vietnam, and various islands in Indonesia, for example also Sumatra. It live in forests on limestone mountains in Vietnam. It lives from 700 m a. s. l. to more than 2958 m a. s. l in West Java. According to von Martens, it lives on the ground under moist leaves together with Stenogyra snails (family Subulinidae). Van Benthem Jutting also reported that is lives on the ground.

This snail has a shell width 18 mm and shell height 9 mm. 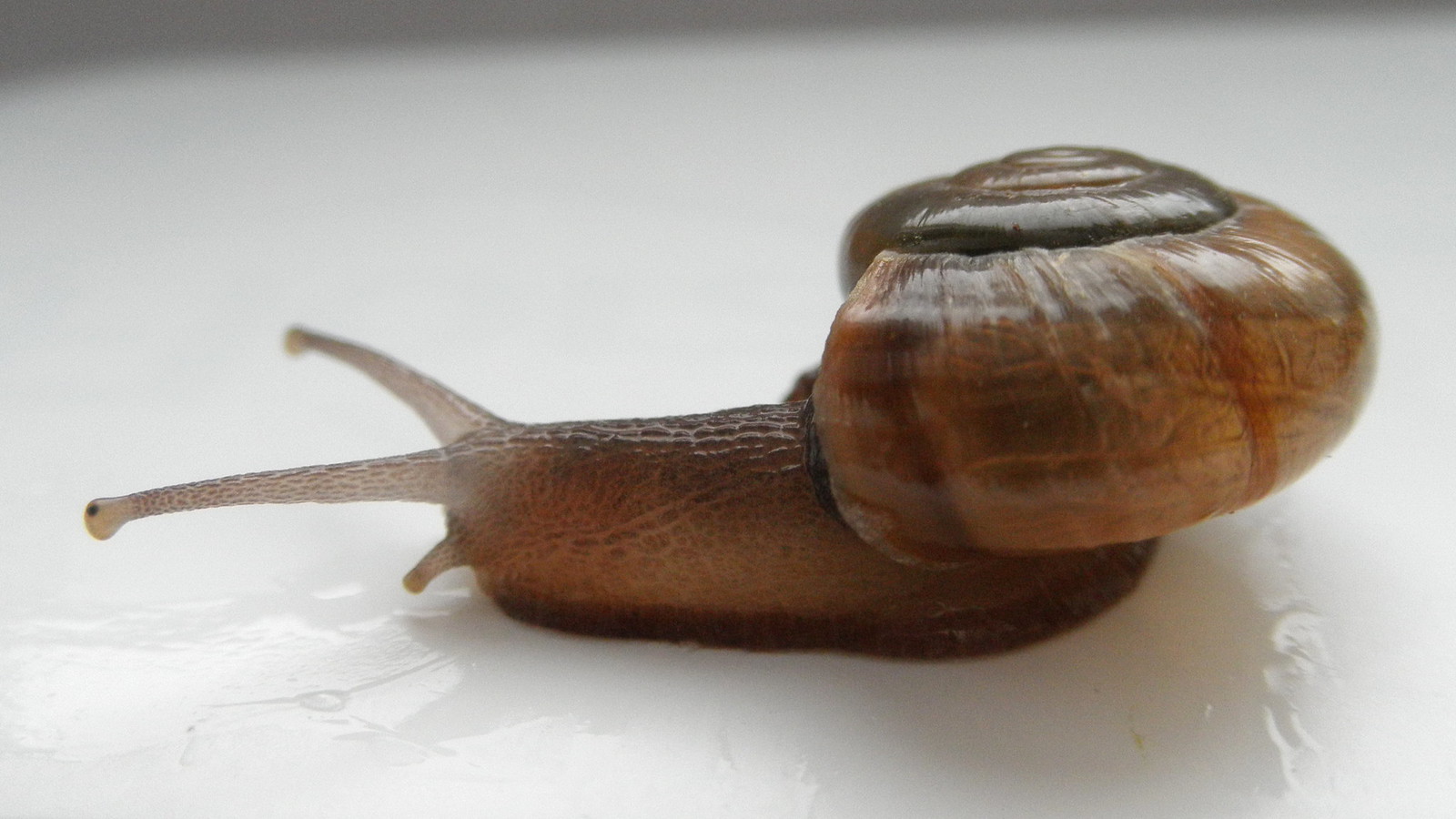 Another left side view:

Just another left side view: 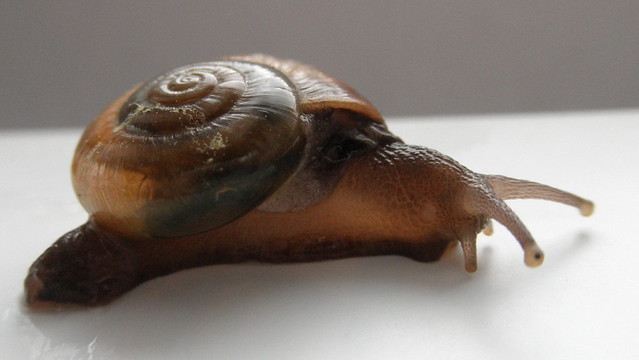 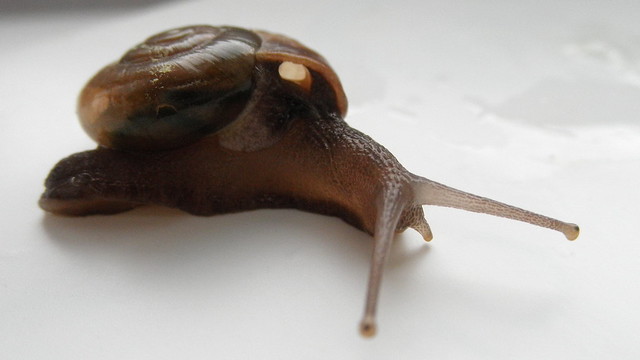 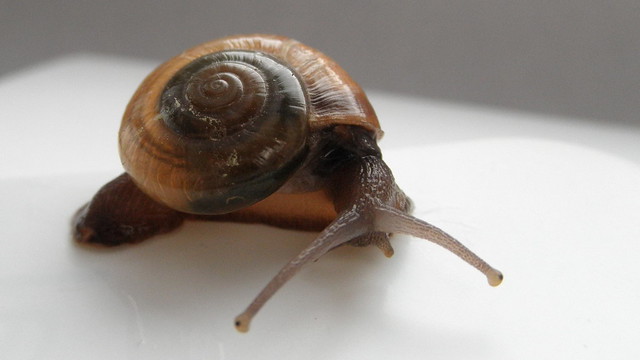 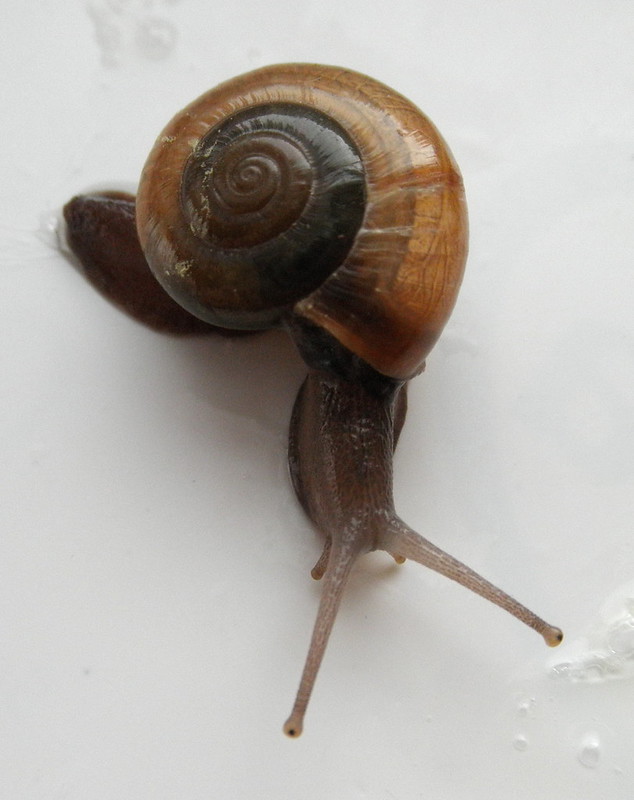 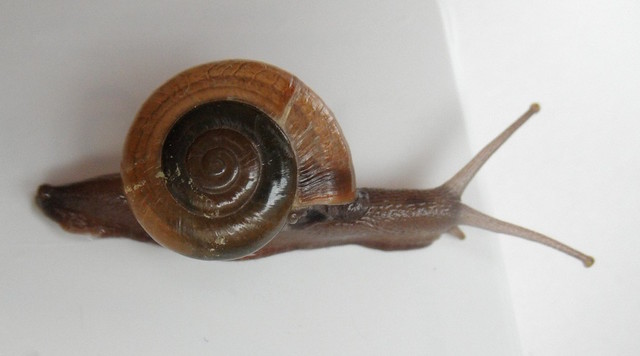 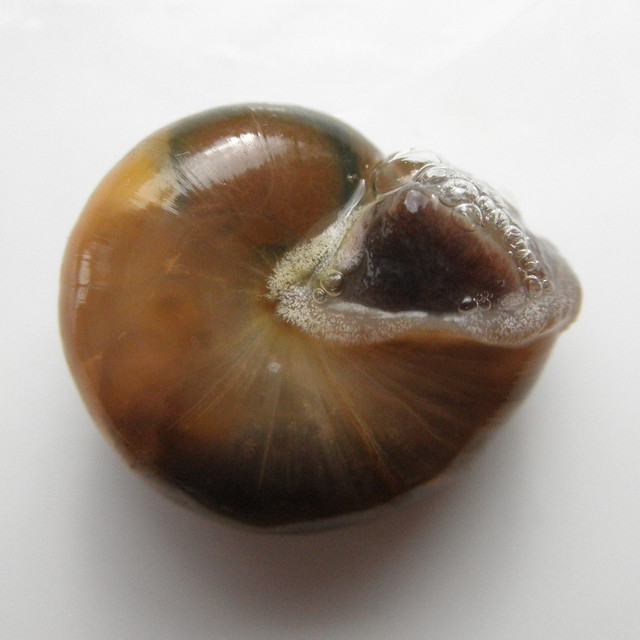 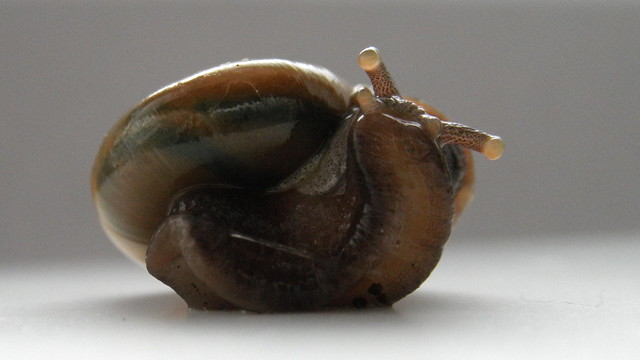 Another Macrochlamys amboinensis snail has a shell width 15 mm and shell height 8 mm. 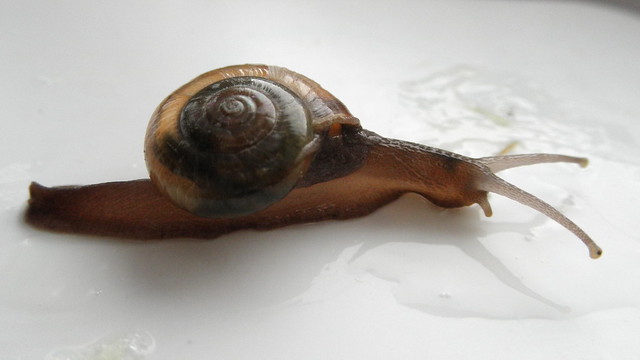 There is visible a tentacle like extension of the mantle of the right side of the body on this right side view. It is called a lobe on mantle collar: 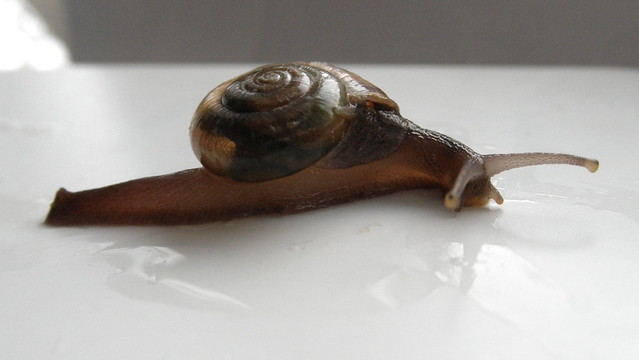 Another view of the mantle extension shows that this specimen has two lobes; on on the right side and one on the left side. The genus can have from one to four lobes on the mantle collar. 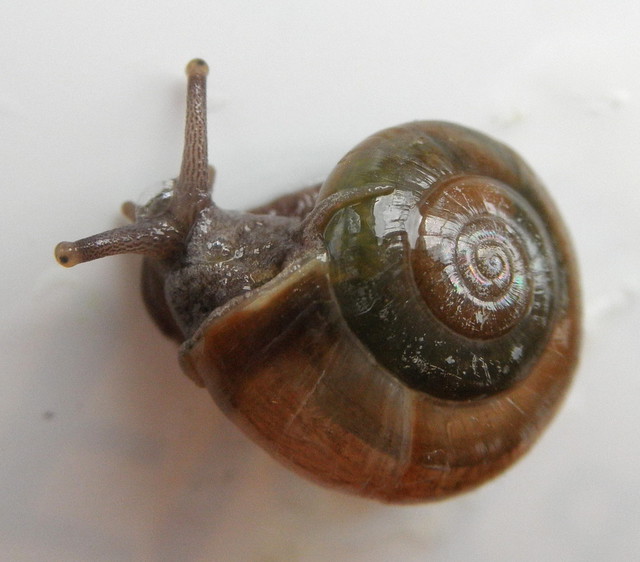 Caudal horn on the tip of the tail. The caudal horn is not always clearly visible on Macrochlamys amboinensis, but it can be seen quite good on this photo: 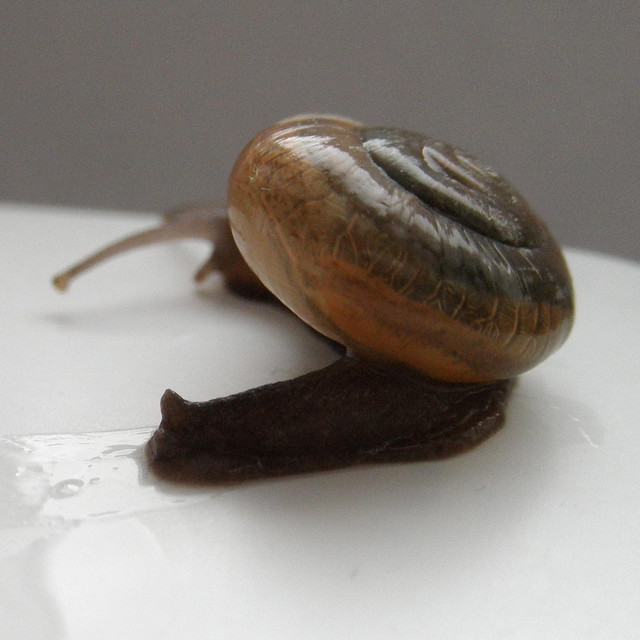 Four different views of the Macrochlamys amboinensis on my hand: 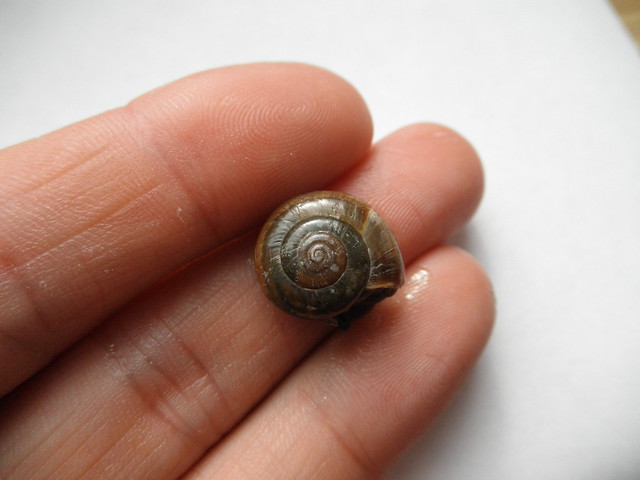 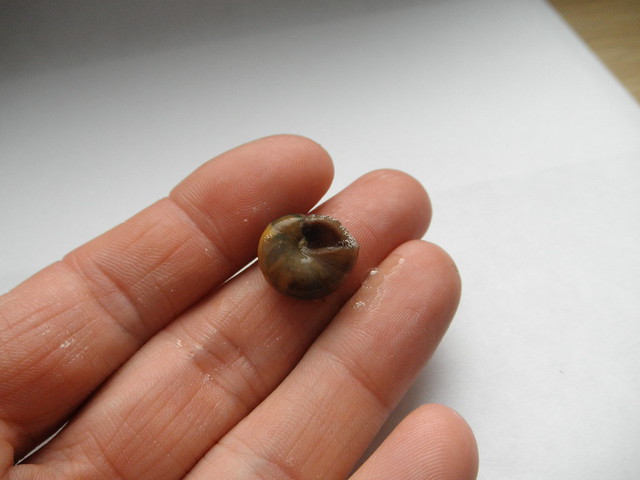 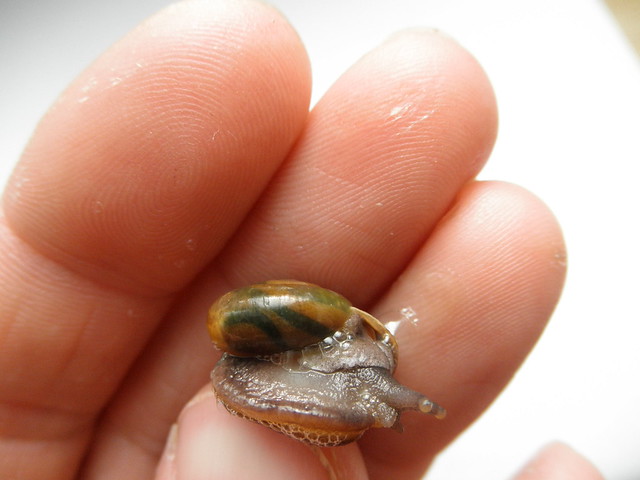 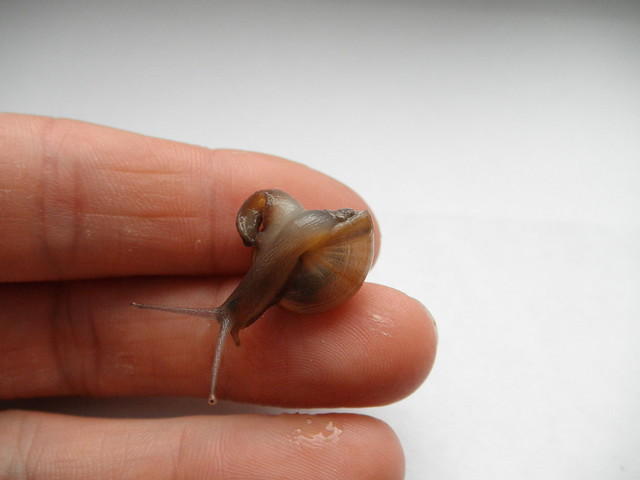 Macrochlamys amboinensis can be fed by vegetables in captivity. My snails normally consume leaves of lettuce (Lactuca sativa var. capitata).

If you will found out other resources on this species, let me to know. This species seems to be easy to keep in captivity, so hopefully some informations about its life cycle will be available in the future.