This is a cluster of eggs of a land slug Arion obesoductus.

It was laid by a specimen, that I captured in central Moravia at October 26, 2017. I captured only one slug and it later laid this cluster of four eggs in captivity. At least two slugs successfully developed and hatched out from these eggs.

I am not sure if there are any informations available about the life cycle of Arion obesoductus. I do not know if laying of four eggs is a rule or exception. Arion obesoductus is a small slug with a maximum body length of 25 mm. So laying clusters with small number of eggs makes sense. Otherwise these eggs looks like any other eggs of slugs from the Arionidae family as well as similar to eggs of many other land gastropods. 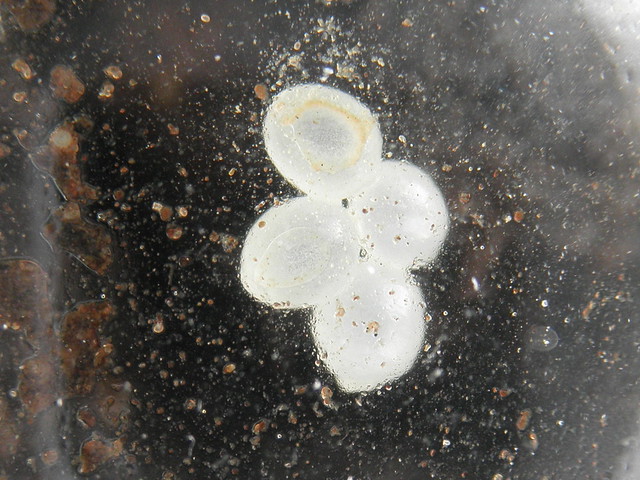 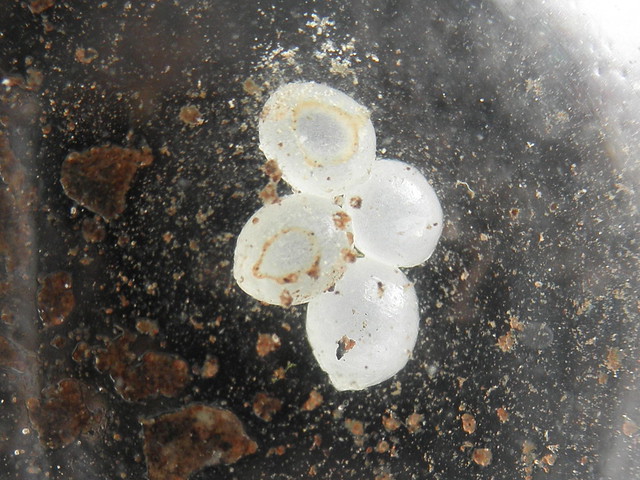 Arion obesoductus Reischütz, 1973 is a small Arion species that lives in undistrurbed forests. Its synonym includes Arion alpinus auct. nec Pollonera, 1887. It lives in Austria, Germany, Slovenia, Croatia, Italy, Switzerland and France. It is found in Alps and around Alps, but its distribution is more wide: also in Central Europe. The first records of this species from the Czech Republic were published in 2006 under the name Arion alpinus. It is not very common in the Czech Republic, but it was found in various areas there. It was neither found in Poland, nor Slovakia and Hungary.

It is often found on mushrooms and I have found it on mushrooms also. My record comes from the forest near the Pateřín village in the Central Moravia, Czech Republic. It is spruce forest (Picea abies) with beech (Fagus sylvatica). Arion obesoductus cooccur with slugs Arion fuscus, Malacolomax tenellus and Lehmannia marginata there. It is similar to Arion fuscus, but its foot is orange:

The orange foot of Arion obesodusctus (two specimen on the right) is easily recognizable even trough plastic translucent test-tube in comaprison of Arion fuscus (on the left). The length of the tube is 58 mm.