Helicina inaequistriata is a species of a land snail from South America. This species is known from Brazil only. It belong to the family Helicinidae that is distributed in tropical and subtropical countries.

I thank my friend and colleague Rodrigo B. Salvador who has kindly shared the following photos for readers of this blog:

These photos accomplish the 2014 article by Rodrigo B. Salvador and his colleagues published in the Check List journal.

The right snail in the above image is the one already mentioned in the paper as a lot stored in the Museu de Zoologia da Universidade de São Paulo, Brazil under the catalog number MZSP 115369. Its shell was depicted on figures 3-6. The width of the shell is 9.4 mm. The height of the shell is 6.6 mm.

The following photo is slightly bigger one than on a published plate:

Four views of the shell of Helicina inaequistriata. Photo by Rodrigo B. Salvador, CC-BY-4.0.

The following image show umbilical view of the shell of Helicina inaequistriata and ventral view of the snail. It shows its extended foot and its tentacles with the position of eyes. 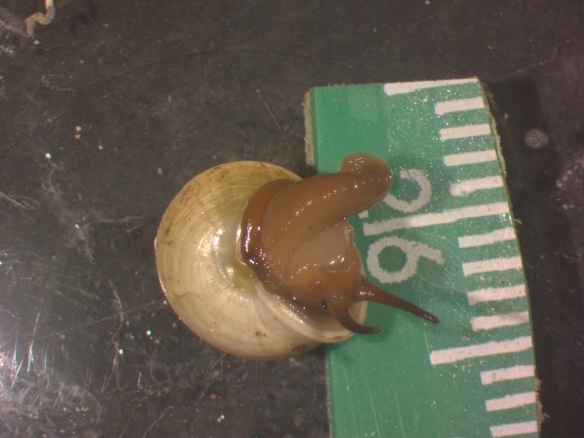 Such tentacles of a land snail resemble for example Pomatias land snails from Europe, but they are not closely related. While the Helicina from the family Helicinidae belongs to the subclass Neritimorpha, the Pomatias from the family Pomatiidae belongs to the subclass Caenogastropoda. It is a nice example that snails have likely become terrestrial animals more than once during the evolution of gastropods. (At least nine times in fact.)