Vitrina pellucida is a small land snail in the family Vitrinidae. It is widely distributed in the Holarctic and it is very common species.

There is visible mantle appendix (extension of the mantle that slightly cover the shell) and open pneumostome (breathing pore) on the photo: 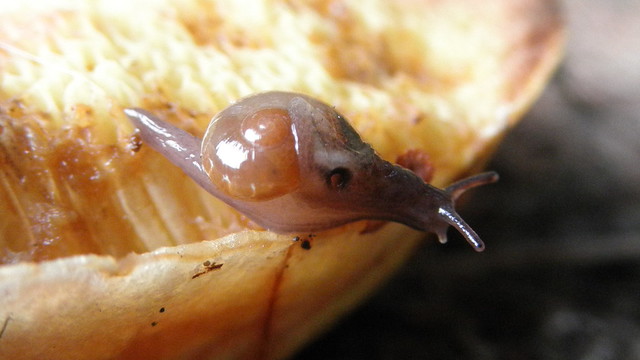 You can find them in autumn much more easily. They are fully grown up to 10 mm in body length in autumn. Then they will lay eggs and die. The next generation will hatch out from eggs at spring. Therefore you can not usually find adult Vitrina pellucida at (late) spring (depending on country).

I was mushroom hunting in Moravia on October 14, 2017. I found this snail altogether with two juvenile Lehmannia marginata slugs on a Xerocomellus chrysenteron mushroom. 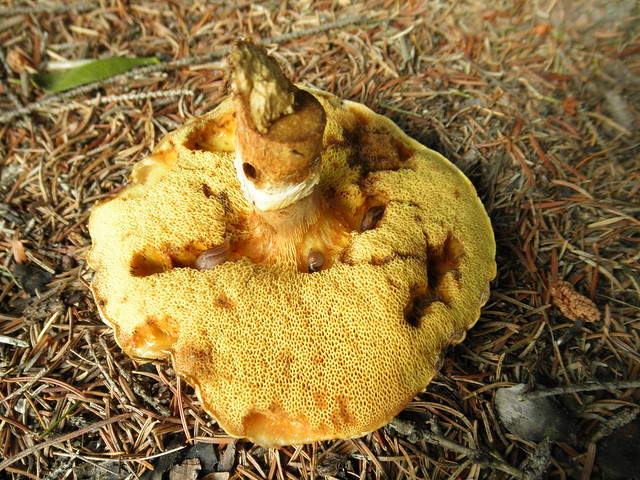 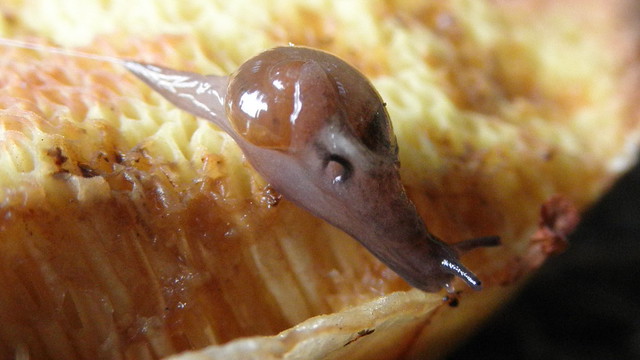 Does the Vitrina pellucida eat mushrooms? I do not know. But what does it eat?

British malacologist John William Taylor (1845-1931) wrote in 1914: “Vitrina pellucida has an almost omnivorous appetite, and is credited with feeding upon Liverwort (Jungermannia platyphylla), mosses, fallen leaves, and decaying vegetable matter. It is also carnivorous, being said by Dr. Baudon to voraciously devour raw mutton, and will also feast upon the bodies of dead or dying worms and animals of its own or other species.”

This can be read (approximately) in human language: Vitrina pellucida eat sometimes deciduous forest litter and dead plants. It is sometimes carnivorous and/or saprophagous. Rarely it also feeds on epilithic and/or epiphytic lichens and on living algae.

Both authors does not mention fungi. Falkner at al. ignored information, that it eats mosses (although mosses have its own column in the dataset and although they cited Taylor in the reference section), but they listed lichens. Among hundreds of references listed at the end on the book only, it impossible to practically detect where informations comes from.