This snail does not live on the ground as other snails, that people usually know. It live undergound in the soil. All species of the genus Cecilioides have no eyes and they are blind.

It is quite common species and it is not threatened, but usually you will find only empty shells in the ground samples. Because of its hidden life, you will find live animals only rarely.

I was lucky and I found one live snail. I have never seen this snail alive before. The mosts surprising was where I have found it. Directly in the garden where I am gardening and snail catching for over 10 years. I thought that I know all snail species, that live there. That was very uncritical. Snails can surprise you anytime.

I have found it below the bowl for the potted plant. The plant is winter resistant, but anyway it is in the pot. It was placed on the lawn. Lawn is destroyed under the pot, because there is some plant placed every year on the same place so there is exposed soil directly under the bowl. I do not care about overwatering the plant on the lawn, so there are probably ideal moisture conditions for snails and slugs. I was looking for some Trochulus hispidus there (as a food for Oxychilus that I still keep in the terrarium) and that is how I found that Cecilioides acicula.

The empty shell is translucent, but the live animal has apical part of the shell in light brown color. 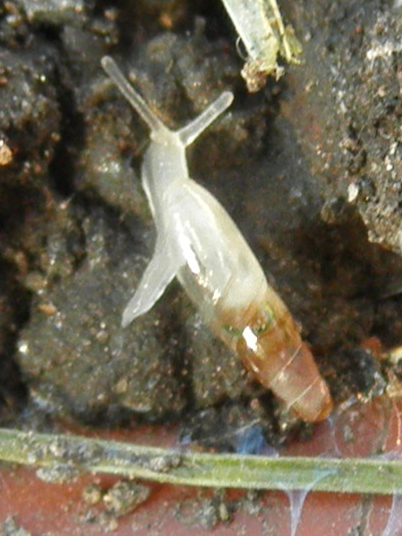 I have also taken few photos under artificial light:

But after 6 minutes after the hot lamp, the snail have moved into shadow and it has hidden into its shell. I was afraid that that my rare finding could die!

The shell of my specimen is only 3 mm long:

Fortunatelly it have survived and it is crawling in my terrarium. I wish if I find at least two snails. Then I could hope, that they can reproduce. But I even do not know what it eats. I think, that maybe it eats some plants, because there is something green visible inside its body (the green color is also visible on photos).