I have put nine Tandonia budapestensis into fully transparent plastic terrarium with internal dimensions: 17 cm long, 8.3 cm width and 2.8 cm high. This transparent box (or any other transparent terrarium) seems to be useful for watching the behaviour of gastropods. They received a piece of skin of watermelon as a food source. They also received some water from water sprayer, but not too much because I was afraid of drowning of slugs. Approximately only centre of the box was sprayed once. There was nothing else in this terrarium. No substrate except of some small pieces of soil that were stinged to slug’s bodies during transport. No ventilation, but probably no loss of water in this closed artificial environment.

About one day later they were “sleeping” and they were clustered like this: 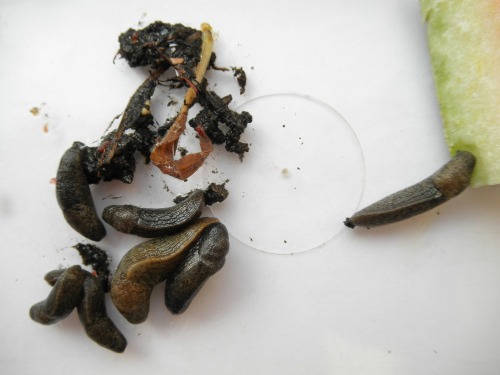 Two of them are not on the photo, because they were on the cover. Those two were also next to each other.

Similar photo of aggregation of slugs (of Limacus flavus) is on the page 470 in the 2001 book The biology of terrestrial molluscs.

This aggregation of slugs is explained as behaviour against loosing of water in drier environment. They are tightly packed to each other and they reduce the area of evaporation. (Snails do not do that, because they can retract to shells.)

I have taken the first photo at 18:57:33 very soon after the removing the cover of the terrarium. All slugs were sleeping and one was eating. Slugs have swiftly found out, that something has changed. After 1 minute 22 seconds (at time 18:58:55) they started to extend their tentacles and started to move.

Next days they did not make similar aggregation. It seems, that instead of that, they “discovered”, that they can be sitting on the watermelon and receive water through the body wall.

You can not see such behaviour if you will keep one, or two slugs in the terrarium.

When I have started to doubt that they will agrregate again and six days later after taking the first photo, I have taken these photos: 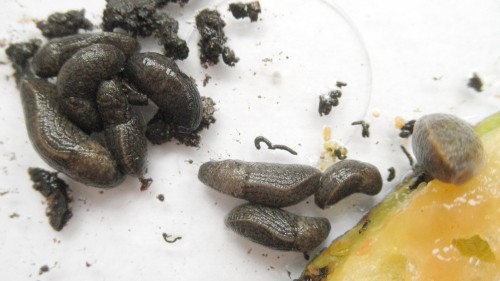